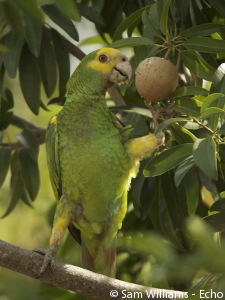 BONAIRE — Outside of Venezuela, Bonaire is home to the only surviving native population of Yellow-shouldered Amazon Parrots (Amazona barbadensis), locally known as the Lora. While global numbers of the parrot are declining, locally the parrot population is showing signs of recovery thanks to the combined efforts of conservation organisations and the local government. While conservationists enjoy seeing more parrots on the island, not everyone finds this as a good thing. Limited food supply in the wild causes increasing numbers of parrots to feed on fruit trees in gardens and ‘kunukus’ (little countryside farmlands). The resulting conflict has the potential to undermine conservation efforts. Bonaire’s situation is by no means unique; conflict between parrots and people is an issue throughout the Caribbean.

Habitat loss and degradation is the underlying cause of parrot/human conflict. Where there used to be fruit trees, there are now houses. Historic tree felling has caused the loss of species that served as the parrot’s staple food resource, including Lignum Vitae (Guaiacum officinale), West Indian Satinwood (Zanthoxylum flavum) and Hog Plum (Spondias mombin), even from the rural parts of the island. This loss has been compounded by large-scale grazing by feral goats and donkeys, and more recently feral pigs. A historic lack of grazing herbivores on Bonaire means trees have not evolved the required defences to allow them to withstand or recover from grazing pressure. Seedlings are not able to mature to fruit-bearing trees, resulting in low food availability for the parrots in rural areas all across the island. 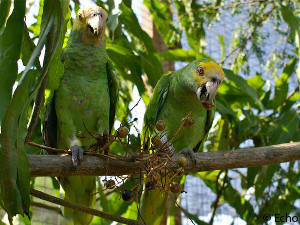 Echo, Bonaire’s parrot conservation organisation, is studying the pressures experienced by breeding and non-breeding adult parrots on Bonaire. For conservation to be effective, it is imperative to know exactly what is happening within the population, otherwise high adult survival might mask poor juvenile recruitment, or vice versa. This is especially the case with long-lived species like the Lora. Lora lifespan in the wild is not known, but estimates are between 40 and 60 years old. Understanding population dynamics over this time period forms a key part of Echo’s research. With a good understanding of pre-fledging survival through previous research, Echo is now focused on post-fledging and adult survival.

In addition to understanding population dynamics, Echo is monitoring the use of rural and urban habitat by the Lora. Observations indicate that parrots prefer to feed in rural areas, but in case of low food availability they are forced to migrate into urban areas. Furthermore, given that the urban-foraging parrots hang around the urban areas most of the day, the Echo team suspect that those individuals are largely non-breeding parrots. Breeding parrots show more active behaviour flying up and down to their nests to feed their chicks.

However beneficial this migration to urban areas might seem to the birds, it could prove to be an ‘ecological trap’, where the initial perceived benefit (more available food) may actually result in higher mortality due to adverse interaction with humans (collision with cars/structures, attacks by dogs or direct conflict with fruit growers). While Echo is working hard to restore habitat in the wild, thus increasing rural food sources and reducing pressure to enter town, this is a long process and urban-foraging parrots will remain a fixed factor for the immediate future. Therefore, Echo has developed a research agenda to investigate the spatial and temporal distribution of food resources for parrots as well as the movement of breeding adults, non-breeding adults and juveniles across the island. 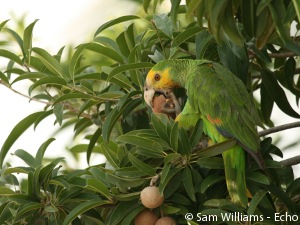 Understanding the distribution of food resources on the island has seen the Echo team scouring the landscape for ‘parrot-important’ trees. With help from local youth groups it has been possible to create a first map of parrot food resources. Further investigation into the production of fruit by these trees is ongoing, enabling the team to understand variation in food abundance throughout the year as well as spatially.

To understand parrot movements, Echo is investigating the daily home range of the breeding and non-breeding parrots using radio tracking. Daily movements are monitored using GPS trackers. The low weight and strong beaks of the parrots are adding extra challenges, since this requires the GPS trackers to be very small, light and strong for the parrots to be able to carry them and not to be able to cast off their trackers using their beaks. The programme will continue to develop over the coming seasons.

Armed with knowledge of parrot habitat and movements, the Echo team will be able to develop mitigation and restoration initiatives to enable the parrot to continue to inhabit the much safer, and preferred, rural environment.

Echo’s tag line is “parrots and people” and although Echo is a new and small organisation, it is trying to help resolve the conflict. One of Echo’s early studies involved an MSc student who investigated deterrents to keep the Loras away from gardens. This study used a kite resembling the Loras’ main natural predator, the Crested Caracara (Caracara cheriway). Unfortunately, the parrots lived up to their reputation and this method only worked for two days, after which the parrots were able to distinguish the kites from a real bird of prey and continued to feed on people’s juicy mangos.

Since the parrots were not to be tricked out of their food source, Echo is developing an outreach programme to help fruit growers understand the role of the Lora on the island. Community surveys form a standard part of this programme, in order to analyse the impact of their outreach efforts. Last year these surveys found that around half of the people living in Rincon, the second biggest town on Bonaire, would rather not see Lora populations rise because they feel that Loras eat ‘their’ fruit. It appeared that there are more people complaining about the Loras than there are people with fruit trees. This has led to the development of a further social investigation.

This year Echo recruited another MSc student to research the socio-ecological aspects of the human/parrot conflict, trying to find the underlying reason for people’s attitude towards the Lora and to put this into a larger perspective. How do people’s attitudes towards nature compare to their frustration surrounding the recent constitutional change, the associated loss of economic power and financial security and social changes in general? Preliminary results suggest that the Lora may act as a scapegoat for deeper social frustrations. 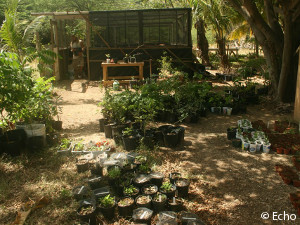 Additionally, in an attempt to address habitat degradation, Echo has been expanding its conservation management activities in the form of habitat restoration. In their native plant nursery, 33 different species of rare native plants are grown, among others Lignum vitae, ‘Palu di Lora’ (literally Tree of the parrot, (Capparis coccolobifolia), West Indian Cherry (Malpighia emarginata) and the Sabal Palm (Sabal palmetto), all of which serve as a food source for the Lora. These trees will be planted back into the wild in herbivore exclosures, as well as in private and community gardens.

With research-driven conservation and outreach, Echo will ensure that Bonaire’s Yellow-shouldered Amazon Parrot population can continue to increase. Future projects will see the development of ‘parrot tours’ with local residents, enabling the inhabitants of Bonaire to realise the economic value of their parrot, as well as the development of Echo’s Dos Pos Conservation Centre, to allow residents and visitors alike to experience Lora encounters in Bonaire’s unique nature. 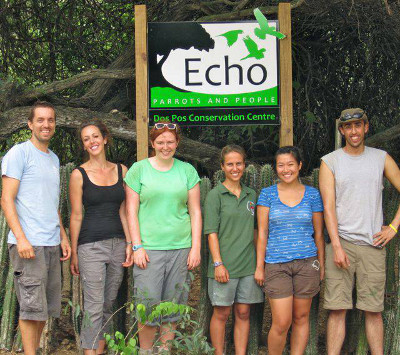 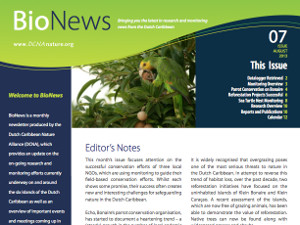 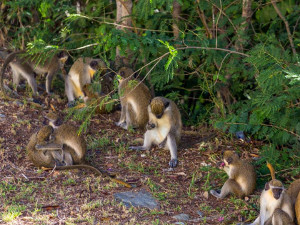