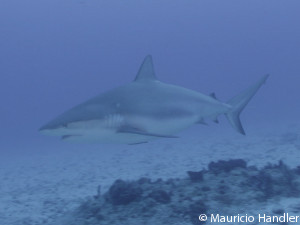 In October 2011 an important step was taken by the St. Maarten government for shark conservation in Dutch Caribbean waters by prohibiting the targeted fishing for and killing of sharks in the territorial waters around St. Maarten. In order to find out whether this legislation proves to be effective and shark populations around St. Maarten are actually rising again, the Nature Foundation, assisted by the island’s dive operators, started a Shark Research Project, tagging individual sharks on a regular basis. An integral part of this project is the creation of awareness among the local population about this legislation and the ecological importance of sharks for the coral reef. Two recent reports about a shark caught and killed on the boardwalk of downtown Philipsburg and a number of people spearing baby rays in Mullet Bay illustrate that there is still room for improvement when it comes to awareness about the importance of these species and about the legislation itself.

Sharks are apex predators, placing them at the top of the food chain, and are essential to the health of coral reef ecosystems. Without sharks, our coral reef ecosystems would be in a much worse shape, since sharks help keep the ecosystem in balance by cleaning the reefs of unhealthy fish. Equally important, the majority of visiting dive tourists that come to see our coral reefs pay top dollar to see sharks in their natural environment as well. The majority of these tourist divers also rent cars, stay in hotels and eat and drink at restaurants and bars, which brings in money to the local economy. A valuation study in 2011 on the value of sharks around Palau, an island state in the Pacific, caused a revolution in shark protection when it calculated that a single shark in Palau waters is worth US$ 1.9 million over its lifetime, in contrast to a mere US$ 108 if it is caught and sold for its meat. A similar study on sharks in St. Maarten waters conducted by the Nature Foundation showed that a single live shark is worth up to US$ 884,000 to the economy of St. Maarten over its lifetime.

The Nature Foundation’s Shark Research Project was launched due to concern for the survival of St. Maarten’s sharks. There is a lively recreational shark fishing industry on St. Maarten and practices were far from sustainable. Thanks to the Nature Foundation, the practice of targeted fishing and 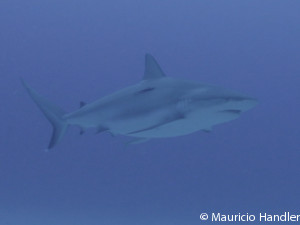 harming of sharks has been prohibited since October 12th 2011, when the St. Maarten Ministry of Economic Affairs banned the practice of poaching sharks in the territorial waters of St. Maarten. The law states that the act of trying to catch a shark by tracking, stalking, baiting, chasing, trapping, hooking, netting, shooting or otherwise hunting for sharks, rays and skates is prohibited and therefore the animals also may not be wounded or killed. In the case of catching a shark accidentally, all steps should be taken to release the animal with as little harm as possible.

In recent years, shark population numbers seem to have been going down. Fewer and fewer sharks are being spotted and in the locations where they are known to be frequent and where previously around twenty individuals could be seen, now only two or three are found. Whether this is due to decreasing shark stocks or a (temporary) displacement is one of the things the Shark Research Project aims to find out. Removing the top predator not only endangers the health of the ecosystem, it would also cause a major financial blow to the tourism industry if this important tourism product were lost. That is why this step, taken by the St. Maarten government is a true milestone in marine conservation and one that will hopefully be followed by governments on other islands, allowing the shark populations in the region to return to numbers needed to sustain a healthy population.

In the rest of the world, people are also starting to realise that we need to protect our sharks. Nearly two years after the historic decision to legally protect sharks and rays on St. Maarten, in March 2013, five shark species and two manta ray species have received international protection, becoming the latest additions to the Convention on the International Trade in Endangered Species (CITES). Practically, this means that these species can now only be traded if they are caught in a legal, sustainable and traceable manner. These listings mark yet another milestone in marine conservation.

“The reputation of sharks as blood thirsty creatures is largely exaggerated by sensationalist reports and all started with the movie Jaws in 1975. Countries all over the world have since recognised the importance of these animals and on St. Maarten we will continue to put shark conservation as a top priority.”

To date, four sharks have been tagged; three Caribbean Reef Sharks and one Nurse Shark. The tagged reef sharks are spotted regularly around the island. The goal is to tag as many sharks as possible to get an idea of their population dynamics, distribution and possible migration between the islands. Local knowledge suggests that there is at least some migration of reef sharks to Anguilla and St. Barthelemy, but scientific evidence has yet to support that.

The Shark Research Project will produce further information on shark abundance, migratory patterns and home range in the marine park and near coastal waters. This information will allow the decision makers to continuously fine-tune and enforce the decree for protection of sharks and rays on St. Maarten.

Additionally, the Nature Foundation will also be re-launching an island wide outreach programme soon. There is still a lack of awareness with regards not only to the importance of sharks and rays to the marine ecosystem and to the economy of St. Maarten, but also to the still existent belief that sharks are inherently dangerous to humans. Outreach will, amongst others, feature public service announcements in the local media, presentations and featured speakers.

Hopefully, the protection sharks have received in St. Maarten’s territorial waters will form part of a wider Caribbean basin initiative, which will protect these magnificent creatures throughout the region.