Did you know that……

As the nesting season of the sea turtle has begun in St. Maarten, it sparked our interest to give our readers some background on these amazing species.

Sadly these ancient marine reptiles that inhabit all of the world’s oceans except the Arctic are globally threatened with extinction (Hawksbill and Leatherbacks are Critically Endangered) – a result of persistent coastal development, incidental capture and marine pollution. This decline has been evident throughout the Caribbean and in some areas the trends are dramatic and likely to be irreversible in our lifetime. Because sea turtles are among the most migratory of all Caribbean animals, what appears as a decline in a local population may be a direct consequence of activities of people hundreds of kilometers away and thus presents a call to not only local conservation, but also regional partnership. 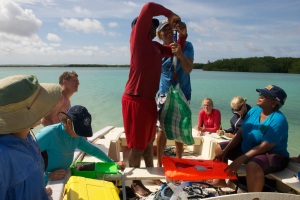 Sea turtle populations, which remain robust in many areas of the Dutch Caribbean, are stressed for many reasons. A major consideration is the destruction and/or modification of habitat. Many nesting beaches have disappeared due to sand mining and development of the coast. Beach trampling by tourists and disorienting light from nearshore buildings have a serious impact on nesting females and hatchings attempting to find the sea.

Pollution from both land-based and marine sources (eg. sewage, plastic, oil) is an increasing problem for sea turtles. The degradation of our coral reef system has also taken its toll on the turtles foraging grounds and while uncontrolled harvesting of turtles has seen policy improvement in the past decade, there are still areas that allow harvesting or do not have the enforcement abilities to adequately protect these endangered species.

Visit Sea Turtle Conservation Bonaire (STCB) to see what is being done to protect sea turtles and how you can do your part for nature in the the Dutch Caribbean.

It takes decades for sea turtles to reach sexual maturity. After mating at sea, adult female sea turtles return to land to nest at night. Different species of sea turtles exhibit various levels of philopatry (the behaviour of remaining in, or returning to, an individual’s birthplace). In some interesting cases, females return to the exact beach where they hatched, traveling great distances each time. This can take place every two to four years in maturity. They make from one to eight nests per season. 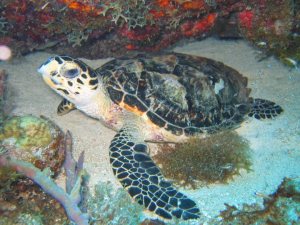 The mature nesting female hauls herself onto the beach, nearly always at night, and finds suitable sand on which to create a nest. Using her hind flippers, she digs a circular hole 40 to 50 centimetres deep. After the hole is dug, the female then starts filling the nest with a clutch of soft-shelled eggs one by one until she has deposited around 50 to 200 eggs, depending on the species. Some species have been reported to lay 250 eggs, such as the Hawksbill. After laying, she re-fills the nest with sand, re-sculpting and smoothing the surface until it is relatively undetectable visually. The whole process takes thirty to sixty minutes. She then returns to the ocean, leaving the eggs untended.

Incubation takes about two months. The eggs in one nest hatch together over a very short period of time. When ready, hatchlings tear their shells apart with their snout and dig through the sand. Again, this usually takes place at night, when predators such as seagulls cannot fly. Once they reach the surface, they instinctively head towards the sea. If, as happens on rare occasions, hatching takes place during daylight, only a very small proportion of each hatch (usually 0.01%) succeed, because local opportunist predators such as the common seagull, gorge on the new sea turtles. Thus there is an obvious evolutionary drive to hatch at night, when survival rates on the beach are much higher. 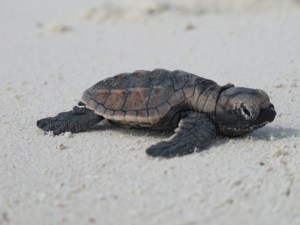 The hatchlings then proceed into the ocean, where a variety of marine predators await them. In 1987, Carr discovered that the young of Chelonia mydas (Green seaturtle) and Caretta caretta (Loggerhead seaturtle) spent a great deal of their pelagic life (any water in a sea or lake that is not close to the bottom or near to the shore can be said to be in the pelagic zone) in floating Sargassum (Seagrass) beds, where there are thick mats of unanchored seaweed. Within these beds, they find ample shelter and food. In the absence of Sargassum beds, sea turtle young feed in the vicinity of upwelling “fronts” (an oceanographic phenomenon that involves wind-driven motion of dense, cooler, and usually nutrient-rich water towards the ocean surface) In 2007, Reich determined that green sea turtle hatchlings spend the first three to five years of their lives in pelagic waters. In the open ocean, pre-juveniles of this particular species were found to feed on zooplankton and smaller nekton before they are recruited into inshore sea grass meadows as obligate herbivores.

Sea turtles play key roles in two ecosystem types that are critical to them as well as to humans—oceans and beaches/dunes. In the oceans, for example, sea turtles, especially green sea turtles, are one of very few creatures (manatees are another) that eat the sea grass that grows on the sea floor. Sea grass must be kept short to remain healthy, and beds of healthy sea grass are essential breeding and development areas for many species of fish and other marine life. A decline or loss of sea grass beds would damage these populations, triggering a chain reaction and negatively impacting marine and human life.

Beaches and dunes form a fragile ecosystem that depends on vegetation to protect against erosion. Eggs, hatched or unhatched, and hatchlings that fail to make it into the ocean are nutrient sources for dune vegetation. Every year, sea turtles lay countless eggs on beaches. 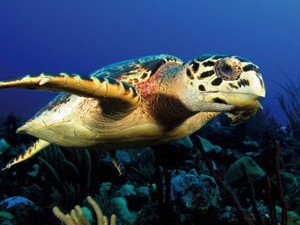 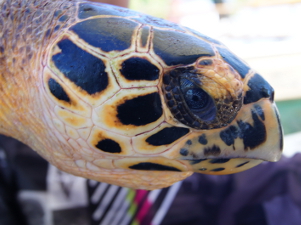