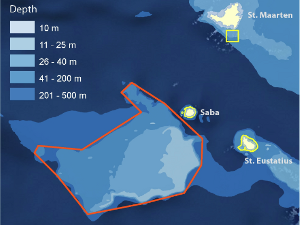 SABA — The Saba Bank, which is located less than five kilometres off the coast of the island of Saba, constitutes the largest actively growing underwater atoll in the Caribbean and possibly the third largest in the world. In October 2012, it was formally designated by the International Maritime Organisation (IMO) as a Particularly Sensitive Sea Area (PSSA). This designation marked the end of a long battle for government officials and conservationists who were trying to demonstrate that while the Saba Bank has some of the most pristine and richest diversity of marine life in the Caribbean Sea, this may not be the case for long without special protection from threats such as heavy marine traffic.

The designation of the Saba Bank as a PSSA is just one of several steps to guarantee that the area is well protected and managed. The Saba Bank National Park was established in 2010 and recognised by the Netherlands in September 2012 to safeguard the wealth of biodiversity on the bank, including sea turtles, migratory humpback whales, more than 200 species of fish and thousands of seabirds. The Saba Bank Management Unit (SBMU), established by the Ministry of Economic Affairs under the banner of the Saba Conservation Foundation (SCF), manages the National Park by patrolling the Saba Bank, monitoring the fisheries, and facilitating further research on the bank. Following the declaration of an Exclusive Economic Zone (EEZ) in June 2010, which includes the entire Saba Bank, the consensus has been made that despite a fragmented Dutch Caribbean, the EEZ should be integrally managed. To this purpose, a management plan has been drafted for the EEZ of the entire Dutch Caribbean. This management plan ensures that the Saba Bank’s fisheries and rich biodiversity are well protected and sustainably managed. 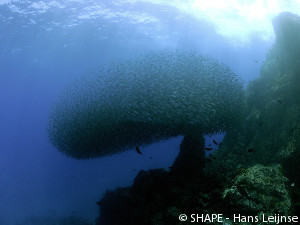 The Saba Bank remained an unexplored mystery for a very long time. The first explorations took place only as late as the 1970s with mixed results: one study concluded that the Saba Bank had minimal reef development but abundant crustose coralline algae and sponges, while a study published soon after found that the Bank’s two large windward reefs had abundant coral growth. Studies that took place in the next decades confirmed what the latter study had uncovered, that the Saba Bank has a rich and healthy coral fauna. They also found that the Saba Bank forms a regionally unique and relatively pristine ecosystem characterised by high biological diversity and productivity. For example, it was discovered that the Saba Bank is likely a source of fish and coral larvae that disperse to the coral reefs of islands in the region. In 2006, a two-week expedition to the Saba Bank discovered hundreds of species of fish, seaweed and other marine creatures not known to occur on the Saba Bank and some even new to science. One study found several stands of the critically endangered Staghorn coral (Acropora cervicornis) on the Bank’s reefs. Another study uncovered that the Saba Bank is the most diverse area for algae within the Caribbean. 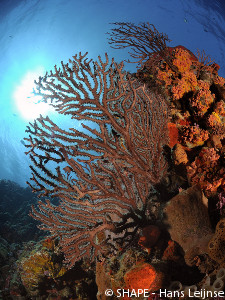 At the same time as excitement and marvel grew over just how incredibly rich and diverse the Saba Bank’s biodiversity is, concerns began to increase over the threats that face the area. Shipping traffic is heavy on and around the Bank; many freighters, oil tankers and cruise ships pass over the Saba Bank and many ships anchor on the Bank to avoid the anchoring fees in the territorial waters of nearby St. Eustatius. There are also reports of tank rinsings, oil spills and the emptying of sewage tanks. Other areas of significant concern include overfishing, traps of local fishing boats, damage by large passing tankers, and global climate change.

For many years the local government of Saba, the Dutch government and many research and conservation organisations worked together to have the Saba Bank designated as a PSSA so that the unprecedented richness of its marine life received an adequate level of protection from marine traffic. When the Saba Bank received PSSA status in 2012 (and became the world’s 13th PSSA), it also received protection through no-anchor zones and safe passageways for tankers.

The PSSA status now makes it part of a select group that includes areas such as the Galápagos islands, the Great Barrier Reef in Australia, the Papahānaumokuākea Marine National Monument in Hawaii, and the Wadden Sea of Denmark, Germany and the Netherlands. In the Caribbean there are only two other PSSAs, the Florida Keys National Marine Sanctuary and the Sabana-Camagüey Archipelago in Cuba.

When an area is approved as a PSSA, specific measures can be used to control the maritime activities in that area. The Saba Bank received two such associated protective measures in the form of a ‘No-Anchoring’ zone for all ships and as of June 1st 2013 its designation as ‘Area To Be Avoided’ (ATBA) for ships of 300 gross tonnage or over came into force. The No-Anchoring zone was established because anchors destroy the bottom and threaten the coral reefs and other unique sea life and the ATBA because ships passing over the Bank often destroy the marker buoys of lobster and fish traps, causing ecological damage because the lost traps continue fishing as so-called “ghost traps” as well as great economic damage for the fishermen. 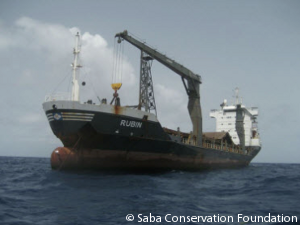 However, on June 5th a large ship was intercepted by SBMU’s patrol boat “Queen Beatrix”. A 100m long cargo vessel, the  “Rubin”, was illegally anchored on the Saba Bank, about 13 miles west of Saba. Unfortunately the SBMU does not have enforcement authority to fine trespassers, so when the cargo vessel was encountered, the Coast Guard was informed. In the meantime the “Queen Beatrix” informed the ”Rubin” that it was illegally anchored. The captain of the “Rubin” questioned the legality of not being allowed to anchor there, but when informed about the National Park and PSSA status of the Saba Bank, the “Rubin” left.