Healthy mangroves act as carbon sinks, storing a variety of greenhouse gases.  As mangroves degrade this ability is lost, but to what extend is still unknown. A 2019 study of Bonaire’s mangroves worked to analyze the differences between intact and degraded mangroves’ ability to store carbon. This work proved that preserving healthy wetlands is crucial in the fight against climate change. 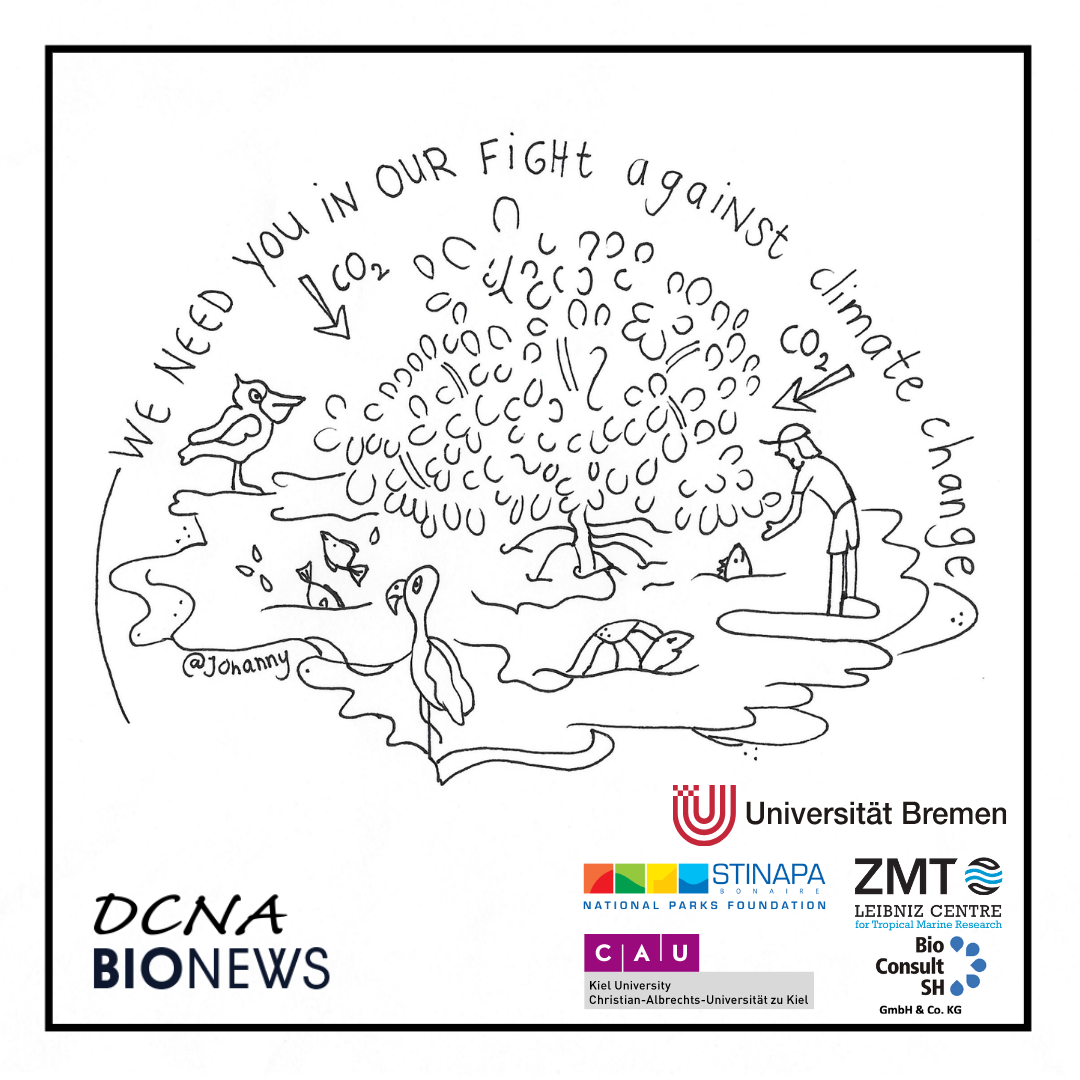 Greenhouse gases, such as carbon dioxide (CO2) and methane (CH4), play an important role in accelerating global warming, worsening the conditions of climate change. When in balance, there are environmental systems in place which can trap greenhouse gases and allow an equilibrium to be reached.  Wetlands serve as a prime example of areas where productive plant communities are capable of storing and using large amounts of carbon through decomposition and photosynthesis.

Carbon which is stored within coastal environments has become known as “blue carbon” and could become key in building resilience against climate change moving forward. Of these blue carbon areas, mangroves are some of the most carbon-rich ecosystems on earth.  Through their dense leaf canopies and complex root systems, it is estimated that they are able to store carbon at a rate of 50 times higher thantropical rainforests.

Unfortunately, these areas are under threat.  Recent estimates have found that nearly one-third of these forests have been removed due to coastal development and land conversion.  In the Caribbean alone, nearly 24% of mangrove area was lost between 1980 and 2005.  When these areas are destroyed, not only do we lose the benefits of future carbon storage, but we begin adding carbon to the atmosphere that had been previously trapped in the sediment.

Scientists are just beginning to understand the importance of these ecosystems.  New policies are being drafted to advocate for these areas as important carbon sinks and policymakers are working to imbed these concepts into future climate change mitigation strategies.  Although the differences between healthy and clear-cut mangrove forests have already been studied, there is still a lack of information concerning forests which slowly degrade.  This slow degradation is generally the result of deteriorating environmental conditions, which causes trees to gradually die off.  As climate conditions continue to harshen, it can be expected that the remaining mangrove forests could see an increase in gradual die off, so understanding how this impacts their ability to function as a carbon sink will become critical. 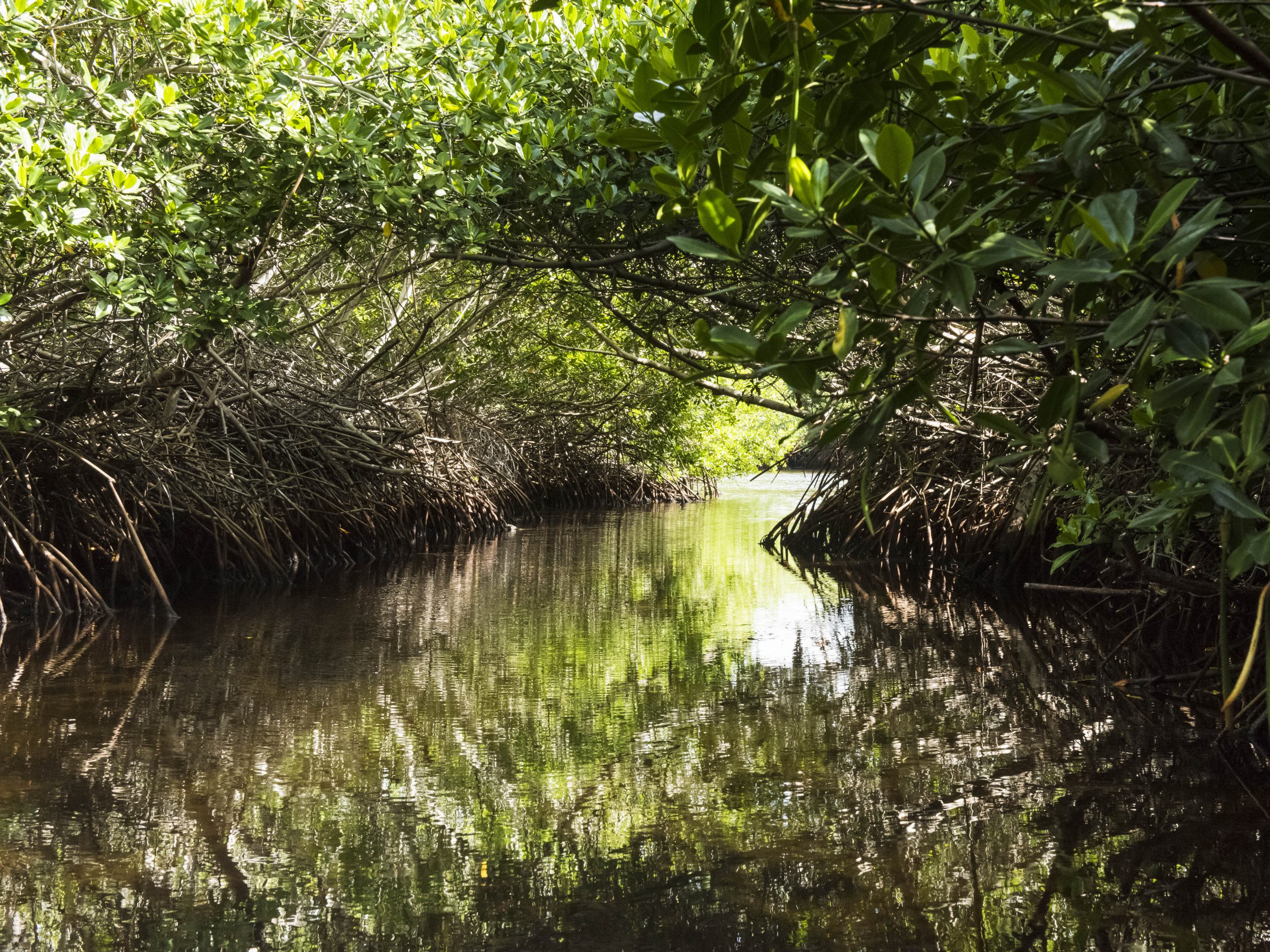 This is the case on Bonaire, where the mangrove forests around Lac Bay have been in gradual decline for decades.  A recent study conducted by the University of Bremen and the Leibniz Center for Marine Tropical Research and STINAPA Bonaire worked to understand these differences by quantifying the carbon sink capabilities of healthy and gradually degrading mangrove areas.

The area which was studied experience high sediment run off, as overgrazing and urban development have removed ground vegetation which would normally minimized erosion.  This high sediment run off has caused infilling within the mangrove forest, minimizing water circulation and creating areas of stagnant and hypersaline waters.  These conditions have led to the gradual die back of mangroves.  The presence of healthy and degraded mangroves within the same forest made Bonaire the perfect location to study the differences in these environments to better understand the carbon dynamics of these areas.

Measurements were taken between January and March of 2019.  17 plots of intact mangroves and 15 plots of degraded mangroves were selected.  In the end, a striking difference was found between these two areas.  Healthy, intact mangroves were seen to have larger amounts of both above ground (leaves, branches, trunks) and below ground (roots, sediment) biomass than those in degraded areas.  Degraded areas had very little aboveground biomass, resulting in less photosynthesis, less sedimentation and more erosion, chemical weathering and higher rates of decomposition within the sediment.  This complete loss of aboveground carbon capture and erosion of sediment meant that these areas could no longer be considered a carbon sink, but in fact act more as a carbon source, allowing previously trapped carbon to reenter the atmosphere or neighboring waters.

The Future of Mangroves

Interestingly, this study found that carbon left the slowly degrading areas slower than in forests where mangroves were intentionally cleared.  This could be important for future climate change mitigation plans as scientists believe that climate change will increase aridity in parts of the Caribbean, Central and South America and South Asia altering hydrology and causing seasonal hypersalinity which will lead to the gradual die off of large amounts of remaining forests. Understanding these differences will be key in forecasting the ability for natural areas to serve as carbon sinks in the future. This study proved that slowly degrading mangroves are no longer functioning as carbon sinks and efforts must be made to keep the remaining forests intact and healthy if we hope to find more natural solutions to minimizing our carbon footprint. 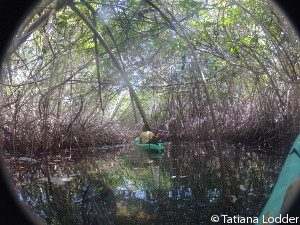 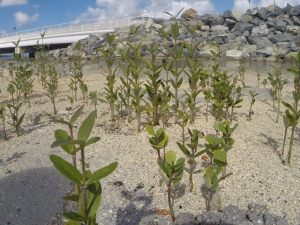 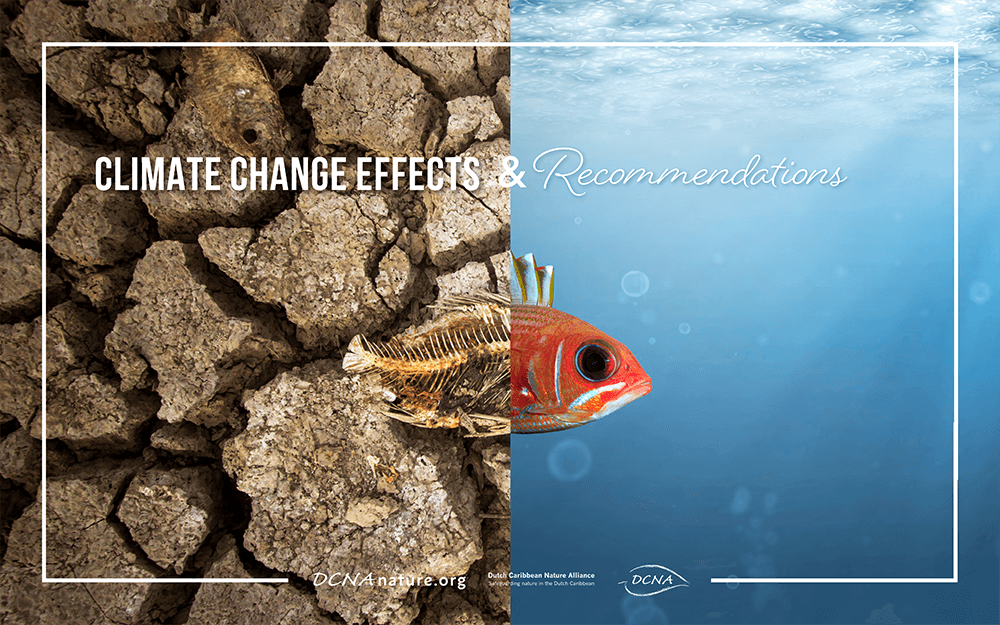 Together We Can Build Resilience Against Climate Change