ST. MAARTEN – In a major move to preserve the heritage of St. Maarten, the government announced this week that it will buy 37 ha (91.5 ac) of land that is part of the Emilio Wilson estate.  On one of the Caribbean’s most developed islands, the land could become St. Maarten’s first terrestrial national park, completing the Dutch Caribbean islands’ efforts to establish at least one terrestrial protected area on each island. 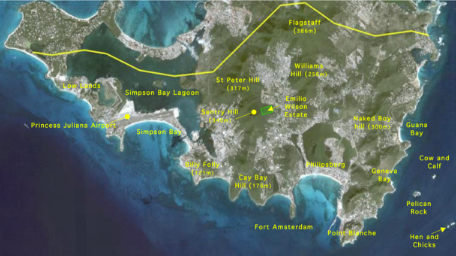 Currently, none of the terrestrial environments of St. Maarten are legally protected, including biologically diverse rainforest, drought resistant habitats and lagoons.

Wilson, who owned the land located on the western side of the road that runs through Cul-de-Sac valley to St. Peter on former sugar plantations, wished to protect it from further building development. 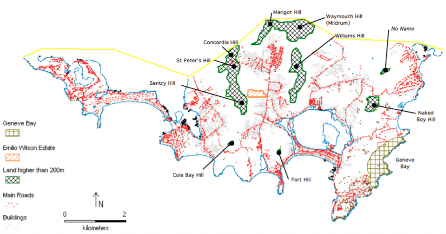 Location of the proposed St. Maarten Land Parks. The areas drawn on this map are representative and the boundaries drawn need to be identified definitively.

St. Maarten is an important resting place for migratory birds, where they are able to forage on their way south before traveling on. The fauna of St. Maarten is less biodiverse than some of the neighboring islands because of habitat destruction, hunting and imported predators. St. Maarten is a home, migratory stopover or breeding site for 10 IUCN Red List Species, nine CITES Appendix I species and 89 Appendix II species, including two endemic plants, many lizards, birds, fish, crustaceans and all of the corals found in the surrounding waters.

This announcement of government support, which could lead to the establishment of the first national terrestrial park on St. Maarten, follows the 2010 declaration creating the Man of War Shoal Marine Park, the island’s first marine protected area. The marine park, managed by the St. Maarten Nature Foundation, protects some of the island’s most ecologically and economically important marine habitat, including extensive coral reef areas and seagrass beds.

With helpful local partnerships, the government’s opportunity to create a legacy for the future of St. Maarten is enormous. 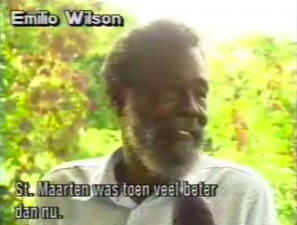 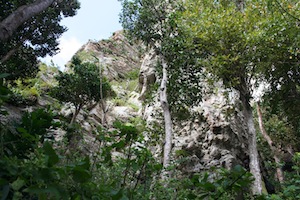 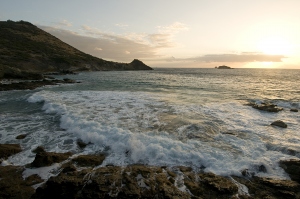