A recently published report issued by the Kingdom of the Netherlands has sounded the alarm that only four of twenty ‘Aichi Targets’ of the ‘Convention on Biological Diversity (CBD)’  have been achieved in the Dutch Caribbean, highlighting increased need for conservation management actions in the Caribbean part of the Kingdom.

The CBD is an international agreement under the United Nations Environment Program that aims to provide an international legal framework to support the conservation and sustainable use of natural resources, ensuring the preservation of biological diversity of contracting parties. In order to achieve this, the contracting parties to the CBD have established a set of goals and targets to promote conservation and sustainable use of natural resources worldwide known as the Aichi Targets.

The Kingdom of the Netherlands  highlights that of the twenty targets which were set for 2020 only four are on track of being achieved on time. These results stress the immediate need for action by conservation groups and government agencies alike.

The current Strategic Plan for Diversity was signed by all contracting parties of the CBD convention in 2010 and runs through 2020.  The plan highlights twenty biodiversity benchmarks known as the “Aichi Biodiversity Targets”.  Every five years, each participating country including the Kingdom of the Netherlands is expected to submit a National Report on the current status for these benchmarks, the latest report gives an update through 2018.

This most recent report from the Kingdom of the Netherlands, released in April this year, states that although there has been some significant progress toward meeting
the national targets, the 2020 deadline will not be fully met. For the Dutch 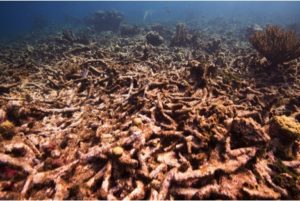 Caribbean, the largest threats to reaching the Aichi Targets are amongst others overgrazing by free roaming feral livestock, invasive species, overfishing, and pollution. These threats make island habitats less resilient to the major threat of climate change. The report also states that not enough is being done to deal with these local threats.

The report did highlight some successes for the Dutch Caribbean and four targets are currently on track to reach the 2020 targets for some of the islands.  These Aichi targets are (1) awareness of biodiversity, (2) biodiversity values integrated into national and local development and poverty reduction strategies and planning, (8) pollution reduction and (17) establishing biodiversity strategies and action plans. The report reflects positively on the public awareness campaigns across all of the Dutch Caribbean that stresses the importance of protecting nature, reducing pollution and encouraging sustainable use of resources. The other three targets are only on track to achieve the targets on the so-called BES-islands of Bonaire, St. Eustatius and Saba.

In many cases, long-term monitoring data is lacking for many of the twenty Aichi Targets on each of the six Dutch Caribbean islands, therefore, the analysis completed was based on experts’ judgments and the actual success varied significantly across the six Dutch Caribbean islands. Since 2010, the BES islands saw an overall increase in funding support and conservation actions, and therefore probably saw greater improvements when compared against Aruba, Curaçao and Sint Maarten, though clearly not enough.

Urgent call for support to all islands

The CBD report highlights both the successes and failures of current environmental policies and management practices in the Dutch Caribbean.  The six Dutch Caribbean islands are a part of the larger Caribbean Islands Biodiversity Hotspot including many natural habitats including coral reefs, mangrove forests, seagrass beds, tropical cloud and rain forests, and caves all with a high level of biodiversity (number of plant and animal species). These islands are highly dependent on the health of these ecosystems both economically and socially. For all Dutch Caribbean islands to meet the Aichi Targets will not be possible without continued support from local conservation groups, public volunteers and governmental aid.

The Dutch Caribbean Nature Alliance (DCNA) is a non-profit foundation that works with dedicated nature management organizations on the six Dutch Caribbean islands to protect biodiversity and stimulate sustainable nature conservation efforts. Every island in the Dutch Caribbean has its own unique natural habitats but faces similar challenges to keep them protected. Climate change, deforestation, overfishing, sargassum influx events, rampant construction and the effects of unsustainable tourism are only a few examples. Collaboration and knowledge sharing is critical in maximizing the efficiency of these efforts.

The full report for the Kingdom of the Netherlands can be found here: https://www.dcbd.nl/document/sixth-national-report-kingdom-netherlands