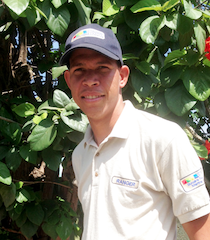 KRALENDIJK — Luigi Eybrecht, a newly appointed Marine Park Ranger of STINAPA Bonaire has been selected by world renowned primatologist and anthropologist Dr. Jane Goodall as the winner of her inaugural Hope and Inspiration Ranger Award.

Mr. Sean Willmore, President of the International Ranger Federation and Founder of the Thin Green Line has invited Luigi to attend the World Parks Congress in Sydney Australia this November where he will receive his award in front of rangers from across the globe and more than 4,000 international conservation delegates on November 15th.

“Willmore wrote in his award letter to Luigi that, “it was his determination, positive approach and energy that shone through. It was a very strong field, but in the end we saw that Luigi embodies everything this award stands for and as such we could not think of a more deserving winner.”

Luigi Eybrecht is the volunteer Commander of the Bonaire Junior Rangers, a youth nature education club and newly appointed Assistant Ranger for STINAPA Bonaire, the organization that manages the world famous Bonaire National Marine Park and the Dutch Caribbean’s first protected area – the Washington Slagbaai National Park. Over the past five years while he was participating in and helping to develop the Junior Rangers, Luigi was also developing himself into a young conservation hero. Now, as an official park employee of STINAPA, Luigi’s role is to monitor important species and ecosystems within and around the parks and to inspire islanders about the unique value of natural resources on and around Bonaire. 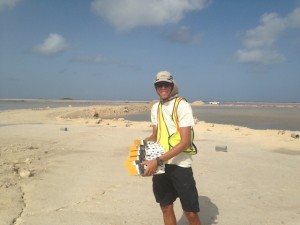 In many ways it may be easier to answer the question, “what doesn’t Luigi do for conservation on Bonaire?” In the field, Luigi assists in monitoring endangered sea turtles, breeding seabirds, over-harvested conch and rare tree species. He helps control the spread of the invasive lionfish, leads reef.org fish monitoring groups and is actively restoring shallow-water coral reef species. While this sounds like a lot of fieldwork, Luigi actually spends even more time and energy on outreach and education. Luigi is a true ambassador for conservation who spends working days as well as evenings and weekends sharing with others his deep appreciation for the parks and nature of Bonaire and inspiring conservation in all.

It’s impossible not to be impressed with Luigi Eybrecht. I have known him for the past four years and had a first hand view of how he has changed the rules of the game for nature conservation on Bonaire. Luigi’s work with the Junior Rangers is spilling over to other islands in the region and within the next few years this engaging and consensus-building approach could become one of the greatest achievements for conservation in the Caribbean.

Born on the small and biodiversity rich island of Bonaire, Luigi learned important life and leadership lessons early on. Facing violence and instability at home, Luigi was placed in a boys’ home at the age of six. By the time he was eight Luigi was looking after the younger boys in the home and sharing with them his confidence and appetite for exploration. After ten years in the boys’ home, Luigi left as an energetic 15-year old with a thirst for knowledge. However, back at home Luigi once again encountered violence, drugs and alcohol. The fork in the road was clear and despite being the most challenging point of his life, Luigi made the correct turn. Knowing that it ends up in suffering, Luigi realized he did not want to go down the path that he had witnessed so many others take and he devoted to not only making his own life better, but to making a difference for Bonaire and the people living here.

Although sometimes a ball of energy and class clown in high school, Luigi was an excellent student with a never-ending drive for information and answers. In class, however, Luigi noticed something was missing from the curriculum – nature and the natural history of Bonaire. As a former Dutch colony, what was taught about nature was often about the temperate forests of the Netherlands and not the wealth of tropical ecosystems and species in Bonaire’s own backyard. There was little in-school information on the two large protected areas of the island and even less on how Bonaireans historically utilized and lived in harmony with nature.

In 2009 at the age of 16, Luigi met Desiree Croes, nature education officer at STINAPA. Desiree was beginning her work to bring nature into the classrooms and young children (8 to 12 years of age) out into Bonaire’s nature through a snorkel club. Desiree’s monthly visits to the high school weren’t enough for Luigi. He began joining Desiree in the afternoon and on the weekends when she would teach kids how to snorkel and identify reef fish and corals. At the same time that Luigi was devouring any literature he could find about Bonaire’s nature and natural history, he was once again in a leadership role for younger kids. With Desiree’s snorkel club Luigi was the one who would dive underwater to help kids discover a new fish species (Luigi can identify nearly 100 species of reef fish!). Luigi’s passion for nature exploration could not be contained within his own body and soon Desiree witnessed how incredibly the young kids would grow a similar passion. 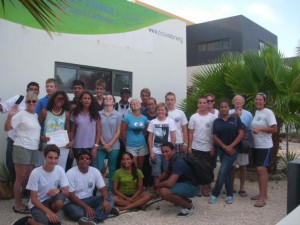 Inspired by Luigi’s positive and relentless energy, Desiree, Luigi and two like-minded classmates launched the Bonaire Junior Ranger Program for teenagers to learn about their island’s nature and get directly involved in conservation. With little budget, no sponsors and few participants, the Junior Rangers did not receive much attention on the island for the first couple of years. Desiree’s persistence in building partnerships allowed her and her colleagues to develop a detailed structure, format and materials for the Junior Ranger program. Luigi’s persistence attracted more teenagers to the club. Today, five years after Luigi first joined Desiree’s snorkel club, the Junior Rangers have five levels complete with a wide range of education and conservation activities. They have sponsorships from two island banks and a large local industry. They have more than 40 active members and 8 volunteers. They meet several times a week to not only learn about nature, but to undertake their own conservation activities. They have traveled to two other Caribbean islands (the third is slated for later this year) to help share their strategy and foster other teenage junior ranger programs. Perhaps most importantly, Luigi and the Junior Rangers have changed the face of conservation on Bonaire. These local youth and young adults are taking ownership of their natural resources and engaging the community in discussion about the future of their protected areas and their islands valuable biodiversity.

As a STINAPA Assistant Ranger, Luigi is now paid to do what he loves, but that is certainly not why he does it and he has also not lost his commitment to the Junior Rangers. At 21 years old he continues to volunteer nearly all of his free time as a youth mentor and Commander for the ranger program he helped build. Just this year Luigi has helped develop new projects for the Junior Rangers to join the Coral Reef Restoration Foundation to grow and replant Acropora coral species in the shallow waters of Bonaire. He is also on schedule to become a SCUBA Dive and has helped almost 20 local youth get SCUBA certified. Luigi will tell you that nature has so much to offer that there is always more to learn. Luigi will not miss out on this offer and if you come in contact with him it’s likely you won’t either. 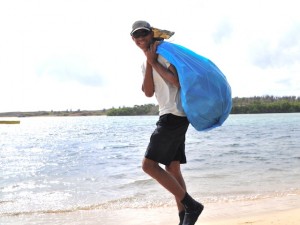 In his own words, “knowledge is the key to caring for nature”. Luigi has helped change the culture of conservation on Bonaire and the public image of STINAPA. In the past, STINAPA has often been perceived locally as strictly an enforcement body. Luigi has taken it upon himself through the Junior Ranger program and now as a STINAPA Assistant Ranger to engage local youth and adults about the value of Bonaire’s natural resources. Luigi often finds himself on the front lines of discussions and even heated debates about resource use and nature laws on Bonaire. This never deters Luigi who will tell you that it is always better to talk issues out. He believes one of the worst excuses people have is, “well this is the way we have been doing things”. That mindset can be changed when people are made aware of the long-term impacts of their actions. Luigi has been the facilitator for discussions on hot topics such as illegal spear fishing and conch harvesting. He has helped provide the facts about sewage impacts on Bonaire’s main tourism product – its coral reef (a new sewage treatment plant has just gone online in 2014). With fellow junior rangers and friends in all corners of the small island with a population of 17,000, Luigi is leading the effort to involve the entire community in planning of natural resource use and conservation. This high-level of engagement is already leading to a better understanding and greater support for the protected areas and is the key to strong community ownership of the national parks and long-lasting conservation.

The Jane Goodall — Hope and Inspiration Ranger Award from the International Ranger Federation would be Luigi’s first formal recognition of his considerable conservation effort for the region. However, informally Luigi is highly regarded for his work. On Bonaire he is known as the nature guy. Luigi loves the recognition and aspires to become an authority on Bonaire nature knowledge that helps all local people be able to understand and communicate about their natural resources. In the Washington Slagbaai National Park Luigi has learned the history of the plantations and harvesting of cacti, aloe vera and salt. In the Bonaire National Marine Park Luigi is recognized as a species expert and an ambassador of conservation. His peers recognize him as a community leader (he has helped organize over 30 community beach cleanups for example). Luigi is also recognized as a great friend to people and nature and is always available to help with a conservation issue. 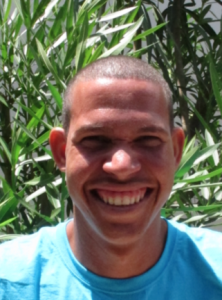 If you meet Luigi once, you won’t forget him and you’ll likely call him a friend for life. Luigi is smart, hardworking, reliable, honest and passionate about nature conservation. It’s rare to see him without a grin from ear to ear across his face. Everyday Luigi shows up to work and volunteer for the parks with relentless positive energy. For him everyday in nature is a fantastic day and this attitude and mood are contagious to everyone he comes in contact with.

I have not met a young person as dedicated to helping develop healthy environments for healthy people as Luigi. Largely due to his sound character and drive to do what is right, he has created a mind shift on Bonaire for the betterment of the people, species and ecosystems. I have talked to many people on the island about this nomination and judging by their reaction and excitement you would have thought I was nominating them. Awarding Luigi Eybrecht with the Dr. Jane Goodall Hope and Inspiration Award would be a great recognition for Luigi, the Bonaire Junior Rangers, STINAPA Bonaire, the citizens of Bonaire and all of the people and creatures across the Caribbean Luigi has had contact with in his budding career as a protected area ambassador. 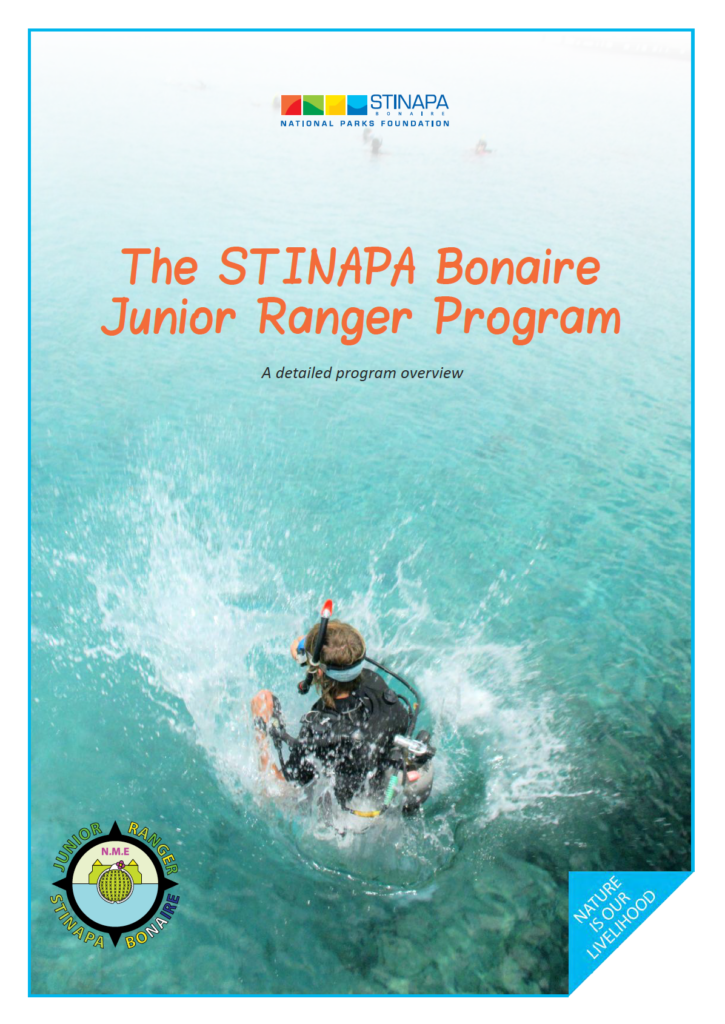 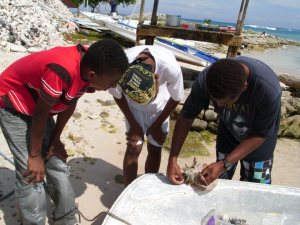 Junior Rangers of the Dutch Caribbean

In time, the true value of youth education naturally presents itself. An example of this has… Read more >