Wageningen Marine Research and Caribbean Netherlands Science Institute released an updated report on the fishery trends for St. Eustatius between 2012 and 2020.  This report used a series of surveys and logbooks entries to estimate total number of fishing trips, landings, species and length averages for locally caught fish and lobsters.

Most fishing on St. Eustatius takes place using small open boats.  In fact, although the fleet averages about 20 boats each year, less than five operate full time. Overall, total number of fishing trips peaked in 2015 and then proceeded to decrease each year reaching a minimum in 2019. There was a rebound in 2020 but it only reached about half of its peak from 2015. 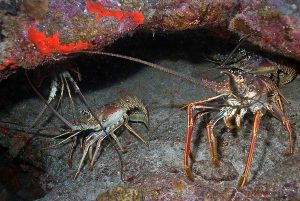 The main species targeted is the Caribbean Spiny Lobster (Panulirus argus) which is mainly caught using lobster traps and by free and scuba divers.  Over this time period, the St. Eustatius lobster fishery averaged between 16 and 48 tonnes caught annual, which although may seem small when compared to the total annual landing for the Caribbean (30,000 tonnes) is actually quite impressive considering the small size of the fishing area.  Overall, estimated annual landings of lobster matched the general fishing trends for the island, being highest in 2015 (47.5 tonnes) and relatively low in 2019 (9.5 tones).

When considering total lobsters caught per trip, it appears that there has been an overall increase in lobster abundance between 2012 and 2020. However, the size of lobsters harvested may be a reason for concern as 42% were under the legal size. 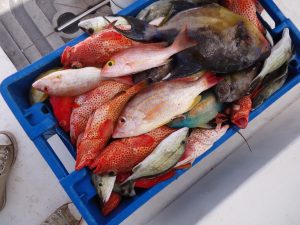 Most of the reef fish landed were caught using fish traps (43%). The rest were caught using handlines (25%), free diving (21%), and scuba diving (10%).  Overall, trends showed highest number of fish caught between 2014-2016 and then a decrease between 2017-2020.  Similar decreases were also seen for both handline fisheries and trollers. These decreases in fish landings are most closely tied to a decrease in fishing efforts over this period.

A number of species are caught as bycatch in lobster traps ranging from blue tang, doctorfish, cowfish, red hind and squirrelfish.  Interestingly, general trends showed a significant decrease in bycatch from 2014 (9.9 tonnes) to 2020 (1.6 tonnes).

Recently, an unofficial Fish Attracting Device (FAD) fishery has been developed around the island, but data for this fishery is still not available. This fishery targets pelagic fish species that are very different than those caught in the traditional, reef-based fishery.  FAD fisheries can lead to a number of issues, such as severe overfishing and arguments between fishermen, so tracking the use and landings of these devices is vital.  While FADs can represent an interesting opportunity for local fishermen and to expand sustainable local food production, there is an urgent need for research and monitoring of this fishery to help guide it to become sustainable.

For more information, read the full report on the Dutch Caribbean Biodiversity Database using the button below. 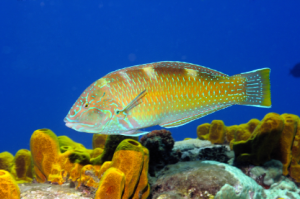 Fish Stocks on the Rise