This article is from BioNews 4 – April 2013. See all BioNews issues here. 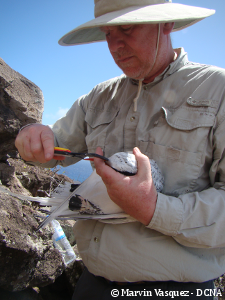 Dr. Adrian Delnevo is a Conservation Ecologist from the United Kingdom and Science Advisor for DCNA.

SABA — In April 2012, representatives from each island within the Dutch Caribbean, DCNA, and several other organisations and institutions discussed how cooperative biodiversity monitoring might be prioritised. A number of approaches were considered and each island provided valuable insight into their own perception of biodiversity priority. Relatively high on this list for Saba, were Red-billed Tropicbirds. This iconic species is central to the Saba Conservation Foundation (SCF) emblem, and residents and visitors alike revel in the aerobatic displays, and sheer majesty of this primarily white, long-tailed seabird.

Unfortunately, this seemingly abundant bird was experiencing a significant impediment to its long-term survival, and the possibility that the regionally important populations on Saba and St. Eustatius were under real threat. Coincidentally, the first indication that something was wrong became apparent during a field course and workshop to monitor the species. Some nests that had an egg or chick were empty a few days later. Following the tropicbird workshop, resident Michiel Beuken continued the monitoring of tropicbird nests, and unfortunately discovered that no nests successfully raised any young at two significant tropicbird colonies. Both of these colonies are relatively near the Saba harbour and the island landfill. However a third area, Old Booby Hill, that has long been known as an area for nesting tropicbird did raise some young, but here too, there clearly were some problems. It is not clear whether St. Eustatius has similar predator problems to Saba, and it is not known if there is any inter-change or movement of birds between these islands. Consequently, it is helpful to know whether there is one large meta-population with interchange between islands, or whether the populations are independent. 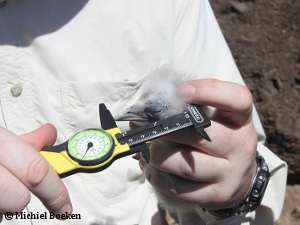 On Saba it soon became apparent that predators were taking both eggs and chicks from tropicbird nests. However, identifying the problem is only the first step. The next step was to determine the scale of the problem, whether the problem was more widespread, and what to do about it. With support and collaboration from the Netherlands, under the guidance of Dolfi Debrot, DCNA, Vogelbescherming and with additional input from IMARES, a plan was developed for a coordinated approach to first quickly get to understand the problem, and then develop an approach to best conserve this species. A key component of the work was to establish how best to study them, and to identify appropriate study colonies. However, predator species, number and distribution including other factors negatively affecting the tropicbird population would need to be assessed too. Determining which predator species might be involved proved an easy task, but understanding whether a small number of individuals or a localised predator population was involved, needed some extra effort. Using infrared cameras along island trails, and within and around the nesting colonies, it became apparent that feral cats and rats were widespread and a significant problem for nesting tropicbirds. Cats have been photographed taking young chicks from the nest, and rats removing eggs. Without the aid of the cameras it would have been easy to assume that Saba accommodates a healthy population of adult tropicbirds, but this information indicated that few, if any, young were being produced. Predation upon tropicbirds had been a problem in the past, but it was unknown how long some colonies have experienced zero nesting success. Clearly, if this situation were to continue, the ageing adult birds would not be replaced by young birds recruiting into the breeding population. The work continues and a coordinated effort to understand the scale of the problem is still underway. This is a practical challenge and careful thought is being given to how it can be managed quickly and appropriately. For example, if the feral cats were to be eradicated, this may lead to an explosion of the rat population. On Saba there typically are three populations of cats. 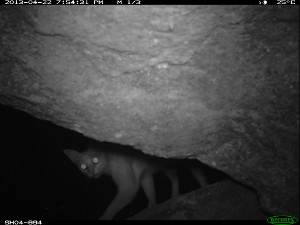 There are the domesticated cats that stay close to people in and around the houses. There are also cats that spend some of their time near to people, and some of their time wandering further afield. Thirdly, there are cats that are feral and have little to do with humans and typically avoid areas with people. It is this last group of cats that is believed to be the immediate problem, and particularly those that stay around the island’s landfill. The cats studied at the landfill are not in good condition, and they scavenge for food, often ingesting non-food items and poor quality food.

Understanding the predator-prey relationship is an important component of successful conservation management, but there are other factors that may be contributing to the poor breeding success. There is some evidence that tropicbird chicks that do not get taken by the cats are growing slowly. This suggests that chicks are not receiving sufficient and quality food. Tropicbirds primarily eat fish, mostly flying fish, but they will occasionally bring squid to their young. Preliminary data suggest that chick growth is being influenced by feeding rates, with some chicks being fed infrequently and with small, poor quality fish. This is useful information to understand the stressors or factors influencing nesting success, but it also provides an indirect indicator or measure of relative fish abundance within the broader marine environment.

A look along the coast, particularly in the late afternoon, would suggest there are large numbers of tropicbirds. However, the breeding status of these flying birds around a colony and how these birds relate to the number of nesting pairs remains unclear. Consequently, the only way to monitor the population and breeding success of tropicbirds is through labor-intensive studies and monitoring. The cameras have helped enormously, and can aid us in determining how often chicks are being fed, whether a nest is successful, and how much time adults attend an egg and/or feed their young and thus protect them. The cameras can even help to recognise individual cats, and the rate of nest visits by cats or other predators.

There is a significant need to know the relationship between the number of flying birds and the number of nesting pairs, as this will make the population monitoring much easier and free-up time to work on other important species and issues. One way to understand many of these issues is to place satellite transmitters on the tropicbirds. This will provide information on exactly where, and when they are feeding, the timing of their return to the colonies and many other aspects of their lives. All together, this information will inform how to assist and prioritise any conservation efforts. A great deal of information on tropicbirds has already been collected, and many more is currently on-going. Analysis of these data occurs on the go, as is the development of adaptive approaches that will ultimately contribute to a sustainable tropicbird population. I am sure we all hope that this magnificent and iconic species will be seen around the islands for years and generations to come.

In January 2013 the St. Eustatius National Park foundation (STENAPA) started a seabird monitoring project, thanks largely to a small grant by the Society for the Conservation and Study of Caribbean Seabirds (SCSCB), which emphasises on Red-billed Tropicbirds (Phaethon aethereus). The project is managed by National Park Ranger Hannah Madden and intern Andrew Ellis, with the weekly assistance of two dedicated high school students. The aim is to assess the risk of predation on tropicbirds and establish the nesting success of this species. This involves visiting three nesting sites per week to measure and weigh chicks, as well as banding adults and chicks as part of a long-term research project.

Given that Saba and St. Eustatius are home to the Caribbean’s largest nesting population of Red-billed Tropicbirds, STENAPA deemed it necessary to determine the risk of predation on St. Eustatius’ own Red-billed Tropicbirds. DCNA loaned STENAPA two cameras, which have been strategically placed outside active nests containing a young chick. Within just a few days one of the cameras photographed a cat outside one of the nests. It is too early to say whether the tropicbirds on St. Eustatius face the same risk of predation as those on Saba; data is still being collected and the results of this six-month study will be available in June. If predation rates prove to be high, STENAPA will take steps to control the feral cat population by working with the animal welfare foundation to sterilise/neuter or euthanise the animals. As well as cats, 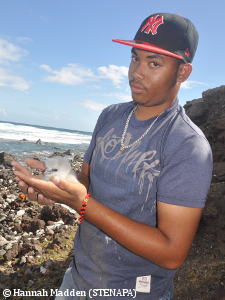 it is believed that rats may also play an important role in predation; live traps will be set up at nesting sites in an attempt to confirm this. It is hoped that the long hours and hard work invested in this project will bring interesting and encouraging results for the only species of seabird known to nest on St. Eustatius.

Besides monitoring tropicbirds, the project also aims to confirm the presence of Audubon’s Shearwater (Puffinus lherminieri). This is a nocturnal seabird that is thought to nest in the cliffs of the northern hills of St. Eustatius, but its presence has long since been confirmed. In order to determine its presence now, the team will have to go out at night with a playback device and play the call of the bird repeatedly to lure them into answering the recording, since Shearwaters tend to be most active around midnight. 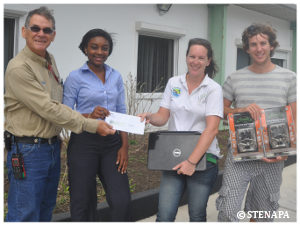 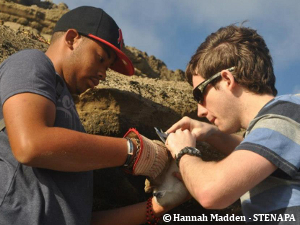