Since 2011, the Saba Bank noise logger research project has been collecting acoustic data of marine mammals, fish and man-made noises within the Saba Bank This project, a collaborate effort between Wageningen Marine Research and the Saba Conservation Foundation, is providing critical data to identify how and when important marine species are using these waters. This information is key for creating and implementing effective conservation plans.

Saba Bank is home to a diverse population of marine mammals. For many of these species, this area serves as a primary habitat for critical activities that include feeding, mating and calving. This is particularly true for a variety of dolphin and whale species. Historically, these species have been hard to track, as researchers are often dependent on visual sightings from fishermen or tourists to detect their presence. However, technological developments are now allowing researchers to listen and record underwater sounds, giving an unprecedented look into the lives of these animals.

Since 2015, Saba Bank has been a part of the Yarari Marine Mammal and Shark Sanctuary. The sanctuary includes all the waters of Bonaire and Saba, and since September 2018, St. Eustatius. This sanctuary was established to help protect the marine mammals and sharks around the Dutch Caribbean. The first step in protecting these waters is to support and promote projects which work to identify the species which can be found here.

Many marine mammals rely on acoustics for spatial orientation, communication, mate attraction and foraging. Each species has the ability to create unique vocalizations and can often adapt these sounds based on conditions of background noise or distance to their targeted audience. Manmade noise can have a variety of negative impacts on marine mammals which can cause confusion, stress or changes in behavior. 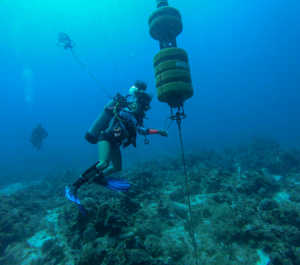 Starting in 2011, the Saba Bank noise logger project has provided valuable information in support of conservation efforts by identifying the specific whale species which can be found in the Saba Bank. These hydrophones (underwater microphones) can record continuously for six months at a time, and give researchers the ability to listen to a variety of marine species, from whales (and dolphins) to schools of fish. Noise loggers detect all ambient noise, including natural background noise produced by tidal current and waves, noise from marine animals such as fish or crustaceans (snapping shrimp) and anthropogenic noise from shipping, seismic operations and naval sonar. Then using the different sounds and frequencies, researchers are able to distinguish species, and  heir relative occurrence over time.

This project, commissioned by the Dutch Ministry of Agriculture, Nature and Food Quality, is a collaborative effort between Wageningen Marine Research, the Saba Conservation Foundation and is supported by international partners such as the Scottish Association for Marine Science (SAMS), the National Oceanic and Atmospheric Administration (NOAA) and CARI’MAM. The goal is to identify the temporal occurrence of cetaceans and where possible their acoustic behavior (e.g. “singing”) and and identify any other sounds of marine animals which can be detected within the Saba Bank. This information will help conservationists and policy makers to draft effective management plans for endangered species in this region.

The project was successful at detecting marine mammals such as dolphins, humpback whales and minke whales. It helped to better understand the migratory patterns of minke whales by comparing recordings in the Caribbean with other areas in the North-west Atlantic. However, this information is only a small piece of the puzzle. The songs produced by humpback whale males can be further investigated to identify individual and local differences. Migratory patterns of humpback whales, both from their feeding grounds to the Caribbean as well as within the Wider Caribbean can be further investigated by linking data collected from other hydrophone stations. In the future detection rates of cetaceans could also be used in combination with visual surveys to improve our understanding of local densities and in the long run possibly population sizes.

Overall, this project has provided important insight to cetaceans using the Saba Bank. Along with providing critical research and data to help support conservation
efforts, this information could also help to develop a new economic source for the island. If the presence of whales and dolphins is better understood and can be predicted, sustainable marine mammal watching tours could be a new and popular tourist attraction for Saba. It is important that all stakeholders on the island work together to ensure these important species are protected and respected, while also working to enhance the lives of the local population.

Please report any sightings or photos you have of marine mammals or other species on https://dutchcaribbean.observation.org. This is a free website and app which allows not only scientists but also citizens and tourist to report sightings of important plants and animals. These tools are available in over 40 languages and can be used by biologists and citizens and tourists alike. Species reports by local communities are invaluable for nature conservation efforts to help increase public awareness and overall species protection. Besides, Observation.org is working together with Naturalis Biodiversity Center on automated species identification software. Your uploaded photos are of great value to make this possible. For questions, please contact research@DCNAnature.org